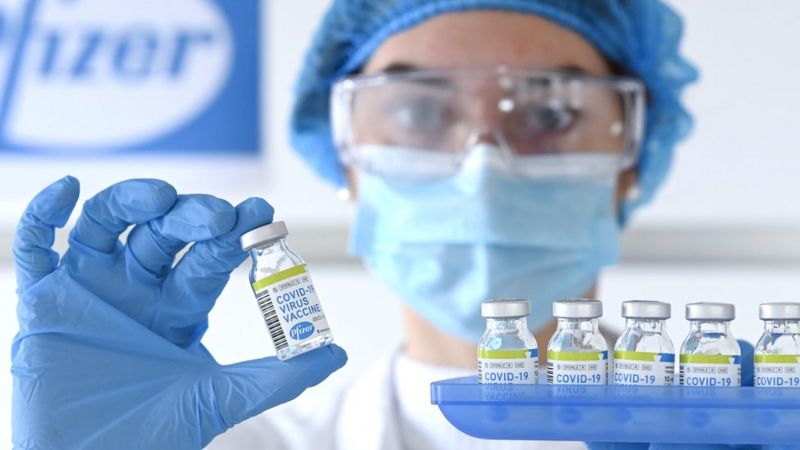 "We do all the same safety checks and the same processes, but we have been able to speed up how they're done because of Brexit," he said in an interview with Times Radio.

And the Leader of the House of Commons, Jacob Rees-Mogg, tweeted: "We could only approve this vaccine so quickly because we have left the EU."

The EU - through the European Medicines Agency (EMA) - has yet to approve a coronavirus vaccine.

But the idea that Brexit enabled the UK to press ahead and authorise one is not right.

It was actually permitted under EU law, a point made by the head of the UK's medicines regulator on Wednesday.

What are EU rules on approving vaccines?

Under European law a vaccine must be authorised by the EMA, but individual countries can use an emergency procedure that allows them to distribute a vaccine for temporary use in their domestic market.

Britain is still subject to those EU rules during the post-Brexit transition period which runs until the end of the year.

The UK's own medicines regulator, the MHRA, confirmed this in a statement last month.

And its chief executive, Dr June Raine, said on Wednesday that "we have been able to authorise the supply of this vaccine using provisions under European law, which exist until 1 January".

We asked Mr Rees-Mogg about his comment that: "Last month we changed the regulations so a vaccine did not need EU approval which is slower."

He replied with part of the text of an "explanatory memorandum" which accompanied new laws passed by Parliament last month.

"The regulation of human medicines is an area of shared competence between the EU and Member States under article 4 of the Treaty on the Functioning of the EU (TFEU)," it reads.

"But in light of the EU's comprehensive exercise of the competence, Member States are precluded from exercising the competence nationally."

It is true that, in general, regulation of new medicines is done on an EU-wide basis. But that does not take account of the emergency provisions in EU law which Dr Raine refers to.

At the government briefing, Prime Minister Boris Johnson was asked whether the UK's vaccine approval was down to a "Brexit bonus".

He refused to answer directly and thanked the NHS and the Vaccine Taskforce instead.

The MHRA is well-regarded as a world leader in the regulation of medicine, and it has certainly chosen to move faster with vaccine approval than the EMA.

"Our speed or our progress has been totally dependent on the availability of data in our rolling review, and the rigorous assessment and independent advice we have received," Dr Raine said.

But again, the MHRA didn't have to rely on Brexit to do that.

For example, the European Commission confirmed earlier this week that Hungary - an EU member - could use a Russian Covid vaccine in its domestic market if it chose to do so.

The EMA appeared to criticise the UK approach in a statement which said it is using a slightly slower method for licensing Covid vaccines than the UK.

It considers this approach to be "the most appropriate regulatory mechanism for use in the current pandemic emergency, to grant all EU citizens access to a vaccine and to underpin mass vaccination campaigns".

The agency said this longer process was based on a wider body of evidence. The EMA has said it will decide by 29 December whether to grant provisional approval to the vaccine manufactured by Pfizer and BioNTech.

That means distribution of the vaccine across the EU - if it is approved - won't start until January, when the relevant EU laws will no longer apply in the UK.

The government says it can be more nimble outside the EU, amidst an ongoing debate about how closely it should stick to EU regulations in all sorts of policy areas.

But the fact that the UK is the first country in the world to approve this vaccine has got nothing directly to do with Brexit.