SIgn up for JAAGNet & the Investment Group its FREE!! Access to mental health treatment is getting easier, and oddly enough, we have the global pandemic to thank for that.

Despite improvements to mental health access, the society-altering effects of the COVID-19 response have wreaked havoc on our psychological wellness: Research shows 80 percent of young Americans report depressive feelings of loneliness as a result of the global pandemic.

Still, as more startups meet the demand for care, they are battling stigmas around mental illness, a shortage of therapists and the knowledge that poor mental wellbeing is likely to persist this year as the pandemic continues to isolate us all.

“Today, we see the sour fruits of COVID because though behavioral health issues were prominent before COVID, the pandemic drove it to such a level of anxiety, depression, financial hardships, etc., that it became impossible to ignore,” Oren Frank, co-founder and CEO of online mental health services company Talkspace, told Crunchbase News. “There became a driving recognition during this time that behavioral health was a good fit for virtual care. You don’t need an X-ray, blood test or for a doctor to feel your arm — it is essentially conversation and a far better fit.”

Experts say the U.S. health system fails to provide adequate access to care and continuity that would result in positive clinical outcomes.

“As a mental health advocate, it feels like mental health was an afterthought for many centuries and is finally catching wind as we recognize how important it is to pay attention to mental health,” said Theresa Nguyen, chief program officer of Mental Health America, an Alexandria, Virginia-based nonprofit promoting mental health as part of overall wellbeing.

As it relates to startups focused on mental health, she said, “We are helping people talk about mental health with more freedom and less fear. When that happens, the opportunity for business growth is going to follow.”

Navigating the health system is historically complicated. Even if the provider is in-network with insurance, billing could be incorrect and there may not be enough providers to fill networks. In addition, if someone doesn’t have money to pay outside of insurance, it is a huge barrier to seeking care, Nguyen said.

Mental health providers don’t always accept insurance as payment due to the complexity in reporting, though there are startups developing tools and resources to address the back-office work, Frank said.

“Seventy-five percent of primary care physicians will accept insurance, but only 20 percent of psychotherapists do,” he added. “The level of reporting makes that job almost impossible.”

Provider shortage is due to a combination of factors, such as behavioral therapy being an underpaid field compared to other medical fields, said Russell Glass, CEO of San Francisco-based Ginger, an on-demand mental health company providing around-the-clock access to emotional support via coaching, therapy and psychiatry.

“By bringing in other kinds of resources, such as behavior health coaches to handle most of the population, they use technology, like chat, and are also able to measure and make personalized decisions so outcomes are better,” Glass said.

In addition, mental health diagnosis isn’t as easy as diagnosis of physical ailments: On one end of the spectrum is a person who doesn’t feel well because they’re isolated from family, colleagues and friends. On the other is someone with a diagnosed chronic illness, mental illness or acute substance abuse who feels suicidal, said Mark Frank, co-founder and CEO of Denver-based SonderMind, a digital health and telehealth company redesigning behavioral health to become more accessible, approachable and utilized.

“The challenge in this space is that the diagnosis is difficult — you may be feeling down, but what does that mean?” Frank said. “If you went to a doctor, they would do some tests and a diagnosis would be understood. In mental health, people try to self diagnose. Maybe you do have depression, but what are the symptoms? With mental health, you need the expertise to peel away the onion and find the underlying issues.”

The mental health market is larger today than it has ever been, according to Ginger investor Josh Cohen, founder of City Light Capital. At the same time, the space is maturing with more capital and talent.

“You may have a problem, but in the current state of mental health, you may need to wait three weeks before you can see someone,” he said. “All that time, your need is festering. To be able to take out your cellphone and have a conversation right then with a coach is powerful.”

During that time, investors pumped nearly $2.6 billion into these companies. In fact, nearly $1 billion of that was handed out in 2020 alone, which saw a 112 percent increase in total investment compared to 2019. (It’s worth pointing out that the dollar figure is actually higher: about 88 transactions do not include a funding amount.) 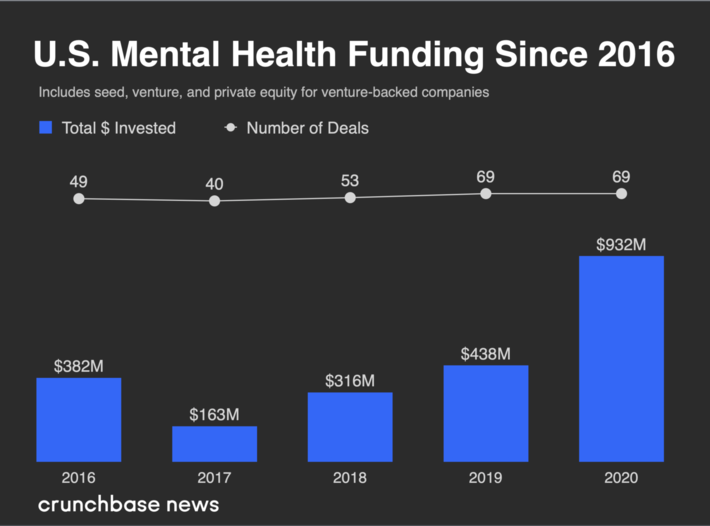 Meanwhile, investors have made $328 million worth of investments in mental health startups already in 2021, surpassing the total for all of 2018, less than two months into the year.

Topping the list is mental health care benefits provider Lyra Health, which has raised more than $480 million to date. After gaining unicorn status following a $110 million Series D round last August, Lyra raised a $187 million Series E in January to boost its valuation to $2.3 billion.

Why the market is taking off

Marc Schröder, managing partner at early-stage venture capital firm Maschmeyer Group Ventures, said mental health investment is kicking off now because the market is big and full of competition, which shows the need is there.

Schröder was one of the first investors in mental well-being platform Modern Health, which is now valued at $1.17 billion after closing a $74 million Series D raise earlier this month led by Founders Fund.

“Last year was just the start,” he said. “Investors are jumping on board because the market is large and booming, and it can handle the competition. If they missed out on Modern Health, they can jump on the next one. This is the trend right now and is only going to grow.”

New York-based Talkspace was founded in 2012 and is another venture-backed success story. The company has raised $106.7 million to date and in January announced it would go public through a $1.4 billion merger with special purpose acquisition company Hudson Executive Investment Corp., which is backed by Doug Braunstein. The transaction is expected to close in the second quarter.

In 2020, the company saw growth accelerate and double, which led to early talks of going public so that Talkspace would have access to capital and drive its offerings to a larger audience, CEO Oren Frank said.

“We looked at a traditional IPO and SPAC, and saw that a SPAC would be simpler and fast, saving us six months of hard work — convenience trumps everything,” he added. “Doug has put together a SPAC with people who are super smart and have incredible experience in health care public companies. That was a huge driver in our decision because the access to that knowledge and expertise was something we could not achieve independently.”

SonderMind’s Mark Frank expects to see more capital going into the space as long as mental health remains one of the low-hanging fruit areas, from a health care standpoint.

Still, he worries that so much capital flowing into a relatively new investment area for VCs may attract entrants that are not as focused on structural change or solving problems within the industry.

“New companies coming in with different wrappers around them might repeat the mistakes of past and sour investors,” Frank said. “We’d like to see good companies get funding and new ones come in ready to make a change.”

The mental health fallout from the COVID-19 pandemic will likely linger even as the acute threat of the virus fades, experts say.

“If you look at the pandemic, it is the perfect story of health insurance, loneliness, depression, financial difficulties and concerns about getting sick,” Glass said. “It is all of this in one, and unfortunately, that tailwind will be on mental health issues once we are out of this.”

He expects it will take one to two years to get back to the baseline where mental health was pre-COVID. During that time, the gap between the “haves” and “have nots” will be exacerbated, he predicts, and it will be important for companies in this space to focus on that.

“We know people need better utilization and immediate access, especially since the normal modality can still take weeks for someone to be matched to a therapist and for them to start accessing care,” Talkspace’s Frank said.

The system also needs to better use data and technology at the point of diagnosis, SonderMind’s Frank said.

For example, with potential cancer, there are blood tests and biopsies to confirm diagnosis, and then, a treatment regime can be prescribed. With mental health, it can be difficult to take such a linear diagnostic approach, he added.

“You can get started using machine learning and artificial intelligence, but you need an immense amount of data,” Frank said. “There is an opportunity as we grow, and for other companies in the industry, to dial in on what positive outcomes mean. Why engage in therapy every other week for 20 years when you may benefit from a quarterly meeting with a therapist and some utilization of an app-driven modality —that would not replace therapy, but augment it — so that it frees up time for the therapist to also see someone else.”

Recurring Revenue Conference - POSTPONED to April 2021 - date to be confirmed