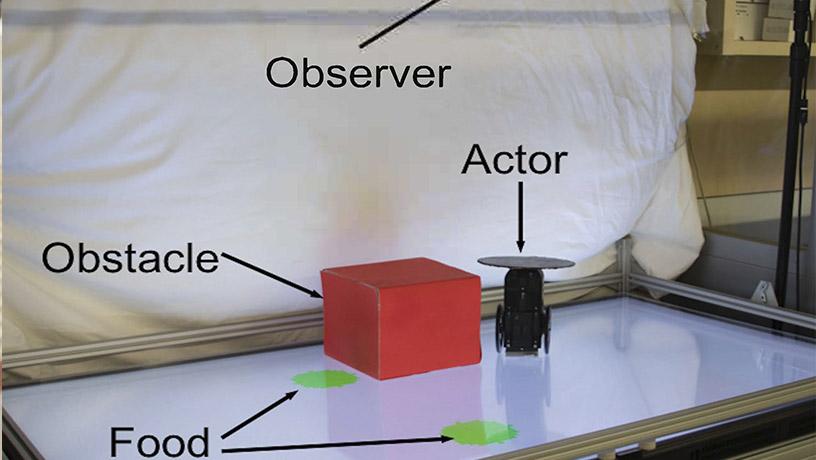 An actor robot runs on a playpen trying to catch the visible green food, while an observer machine learns to predict the actor robot's behavior purely through visual observations. Although the observer can always see the green foods, the actor, from its own perspective, cannot due to occlusions.

Columbia engineers create a robot that learns to visually predict how its partner robot will behave, displaying a glimmer of empathy. This “Robot Theory of Mind” could help robots get along with other robots—and humans—more intuitively

New York, NY—January 11, 2021—Like a longtime couple who can predict each other’s every move, a Columbia Engineering robot has learned to predict its partner robot’s future actions and goals based on just a few initial video frames.

When two primates are cooped up together for a long time, we quickly learn to predict the near-term actions of our roommates, co-workers or family members. Our ability to anticipate the actions of others makes it easier for us to successfully live and work together. In contrast, even the most intelligent and advanced robots have remained notoriously inept at this sort of social communication. This may be about to change.

The study, conducted at Columbia Engineering’s Creative Machines Lab led by Mechanical Engineering Professor Hod Lipson, is part of a broader effort to endow robots with the ability to understand and anticipate the goals of other robots, purely from visual observations.

“Our initial results are very exciting,” says Boyuan Chen, lead author of the study, which was conducted in collaboration with Carl Vondrick, assistant professor of computer science, and published today by Nature Scientific Reports. “Our findings begin to demonstrate how robots can see the world from another robot’s perspective. The ability of the observer to put itself in its partner’s shoes, so to speak, and understand, without being guided, whether its partner could or could not see the green circle from its vantage point, is perhaps a primitive form of empathy.”

Predictions from the observer maching: the observer sees the left side video and predicts the behavior of the actor robt shown on the right. With more information, the observer can correct its predicitons about the actor's final behaviors.

The researchers acknowledge that the behaviors exhibited by the robot in this study are far simpler than the behaviors and goals of humans. They believe, however, that this may be the beginning of endowing robots with what cognitive scientists call “Theory of Mind” (ToM). At about age three, children begin to understand that others may have different goals, needs and perspectives than they do. This can lead to playful activities such as hide and seek, as well as more sophisticated manipulations like lying. More broadly, ToM is recognized as a key distinguishing hallmark of human and primate cognition, and a factor that is essential for complex and adaptive social interactions such as cooperation, competition, empathy, and deception.

In addition, humans are still better than robots at describing their predictions using verbal language. The researchers had the observing robot make its predictions in the form of images, rather than words, in order to avoid becoming entangled in the thorny challenges of human language. Yet, Lipson speculates, the ability of a robot to predict the future actions visually is not unique: “We humans also think visually sometimes. We frequently imagine the future in our mind’s eyes, not in words.”

Lipson acknowledges that there are many ethical questions. The technology will make robots more resilient and useful, but when robots can anticipate how humans think, they may also learn to manipulate those thoughts.

“We recognize that robots aren’t going to remain passive instruction-following machines for long,” Lipson says. “Like other forms of advanced AI, we hope that policymakers can help keep this kind of technology in check, so that we can all benefit.”

Columbia Engineering, based in New York City, is one of the top engineering schools in the U.S. and one of the oldest in the nation. Also known as The Fu Foundation School of Engineering and Applied Science, the School expands knowledge and advances technology through the pioneering research of its more than 220 faculty, while educating undergraduate and graduate students in a collaborative environment to become leaders informed by a firm foundation in engineering. The School’s faculty are at the center of the University’s cross-disciplinary research, contributing to the Data Science Institute, Earth Institute, Zuckerman Mind Brain Behavior Institute, Precision Medicine Initiative, and the Columbia Nano Initiative. Guided by its strategic vision, “Columbia Engineering for Humanity,” the School aims to translate ideas into innovations that foster a sustainable, healthy, secure, connected, and creative humanity.

Views: 7
E-mail me when people leave their comments –
Follow