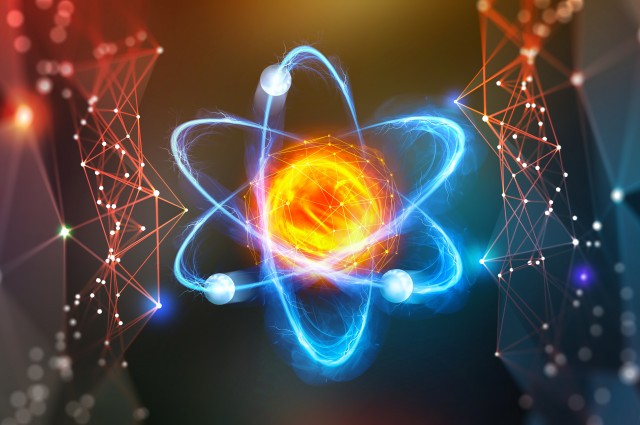 RESEARCH TRIANGLE PARK, N.C. -- Quantum information represents one of the Army’s most promising science and technology investments for the future. Several technologies in this field, ranging from quantum computing, simulation, sensing, communication and networks show great potential, according to Army scientists.

Quantum computers manipulate qubits rather than the ones and zeros in classical computers, and rely on the counter-intuitive properties of quantum mechanics to enable the solution of problems that were considered impossible in the past. These future advances will enable researchers at the U.S. Army Combat Capabilities Development Command, now known as DEVCOM, Army Research Laboratory to envision solutions for future success on the battlefield.

For example, these futuristic computers will have the ability to solve problems that scale exponentially, such as the factorization of very large numbers.

According to Dr. Peter Reynolds, the Army’s senior research scientist for the physical sciences and a researcher at the lab’s Army Research Office, such problems could take classical computers longer than the age of the universe to answer, which difficulty lies at the heart of online security.

“If I give you a large number to factor, let’s say it takes you an hour to try all the possible factors; but if I make that number just a little larger, it will now take several years to factor; and a little bit larger still, it will take longer than the age of the universe,” Reynolds said. “This is what we mean by a problem that a classical computer can’t solve, because it scales so incredibly fast…exponentially fast in this instance.”

Quantum computing exemplifies only one of several applications of quantum mechanics that fall under the larger umbrella of quantum information science, which continues to receive widespread recognition and support for its advancement.

Despite its breadth and scope, and even international prestige, quantum information science originally began just as an offshoot of atomic and molecular physics.

Reynolds described how the Department of Defense’s pursuit of visionary ideas, as well as his own role as a program officer at the Office of Naval Research, helped the budding field grow into the global phenomenon we know today.

“At the Office of Naval Research, I had invested in a lot of the early work in laser cooling and trapping, which was foundational for what became quantum information science,” Reynolds said. “A lot of it also grew out of a related field called precision metrology, which is the science of measurement.”

Reynolds first became interested in the basis of quantum information science when he learned about the potential to exploit the bizarre property of quantum mechanics called entanglement, that Einstein referred to as “spooky action at a distance.” This idea had been in the back of his mind for many years, but talk of exploiting it began to pick up during the 1980s.

As the newly hired ONR program manager for atomic and molecular physics, he noticed that the field of atomic physics was slowly morphing into something entirely new from how he had perceived it in graduate school.

“I began to see that the forefronts of atomic physics were evolving in ways that they could converge with statistical physics,” Reynolds said, “which had been my specialty and area of interest. “I pushed the frontiers in atomic physics into those areas, partly because they were exciting to me, but also because they had clear connections to DOD interests.”

One such research area pertained to timekeeping. The Navy has the master clock for DOD at the U.S. Naval Observatory, which maintains time and is used to synchronize the numerous GPS satellites around the world.

The atomic physics research he supported for making and trapping those ultra-cold atoms and ions enabled the development of advanced atomic clocks. But, says Reynolds, to his amazement, this direction of research also inadvertently helped build the foundation for quantum information including quantum computers.

“Out of funding the science behind these ultra-precise clocks—which were based on atomic ions trapped in RF traps—came the very first quantum bit,” he said. “We went from precision metrology, which was work we supported at the National Institute of Standards and Technology for these atomic clocks, to the beginnings of quantum information science.”

After joining the Army Research Office, Reynolds continued to invest in cutting edge new ideas in atomic and molecular physics, including ones that would further impact quantum information science. Extending beyond simple atoms, he began the support of work in cooling and manipulating molecules as well.

“Molecules have much more structure, on the one hand making them far more difficult to manipulate, but on the other hand giving us many more handles for control and exploitation,” Reynolds said.

The application of quantum mechanics in these various ways offers immense potential for the Army to achieve technological surprise against adversaries, Reynolds said.

For instance, research in quantum sensing may lead to the creation of sensors that can on the one hand sense electromagnetic fields, and on the other hand to provide position, navigation and (as already mentioned) timing. Such devices may prove invaluable for Soldiers in GPS-denied environments.

“These quantum sensing approaches can serve as replacements for GPS, where you don’t have to worry about the satellite signals getting jammed or spoofed,” Reynolds said. “All of these applications are very Army-relevant, because we want to be able to determine where our assets are and where the enemy is.”

In order for scientific revolutions akin to quantum information science to emerge in the future, Reynolds believes that the Army needs to continue to pursue budding research avenues and opportunities long before they become recognized by others.

Part of that work, he pointed out, stems from the collaboration of researchers in a range of scientific and engineering disciplines across the Army and DOD to create a full spectrum of science and technology capabilities.

“I have supported quantum information science for three decades, and it’s now widely recognized as an Army priority research area,” Reynolds said. “You have to have persistence and carry these ideas forward, and be very visionary in terms of seeing the things that are going to have this kind of long-term impact.”

Views: 26
E-mail me when people leave their comments –
Follow